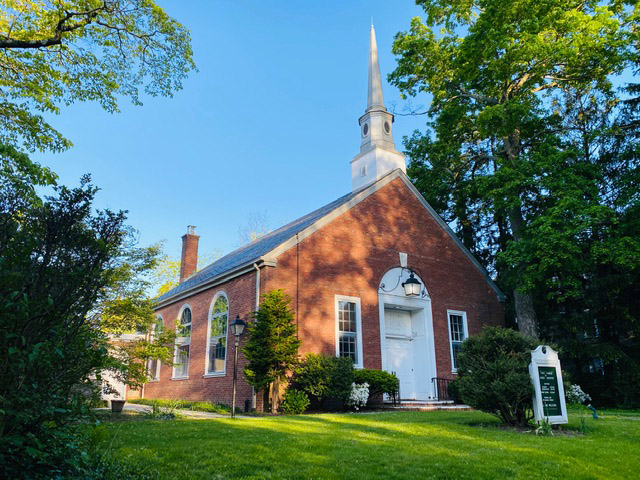 MORE THAN A CENTURY OF CHRISTIAN SCIENCE IN PRINCETON

Over 100 years ago, a group of residents in Princeton and the surrounding towns, who were interested in the healing benefits of Christian Science, decided to hold weekly informal meetings to read together the Christian Science Bible Lesson-Sermon.

In 1914, the informal gathering became a Society (the first step toward becoming a branch church).  By 1928, the Christian Science Society had become First Church of Christ, Scientist, Princeton, a recognized branch of The Mother Church, The First Church of Christ, Scientist, in Boston, Massachusetts.  The church services were held in a small building on Olden Street.

The church has served the Princeton community ever since.

In 1866, Mary Baker Eddy was healed of a near fatal injury while reading a Biblical account of one of Christ Jesus’ healings. She realized through this healing that there must be some method behind his healing work.  To find the answer, she turned to the Bible, including original texts which she learned to read as a young student.  As her Bible studies progressed, she realized that she had discovered the Science of spiritual healing taught and demonstrated by Christ Jesus in his ministry on earth.

Wanting to share this discovery with all mankind, she began to write what she was learning, and in 1875, she published the first edition of the Christian Science textbook, Science and Health with Key to the Scriptures. This scientific healing method was proven through a vast accumulation of documented cases of physical, mental, emotional and situational healings by her and by thousands of others whom she taught, at first in small classes, later in her Christian Science Metaphysical College in Boston, Massachusetts (1881-1889).  Since 1892, Christian Science healing has been taught through the church.

Mrs. Eddy saw that it would take more than a book and a small college to make this spiritual science available to all, so in 1879, she founded the Church of Christ, Scientist “designed to commemorate the word and works of our Master, which should reinstate primitive Christianity and its lost element of healing.” (The Church Manual, p. 17:10-13).   In 1892, realizing that a more spiritual organization was needed, she dissolved the 1879 church and reorganized it, under The Church Manual, with a new design, and re-named it The First Church of Christ, Scientist, also known as The Mother Church, which includes branch churches throughout the world. The Mother Church, with its branches, is “designed to be built on the Rock, Christ; even the understanding and demonstration of divine Truth, Life, and Love, healing and saving the world from sin and death; thus to reflect in some degree the Church Universal and Triumphant.” (The Church Manual, p. 19:2-6).

For in-depth information about the life of Mary Baker Eddy, and Christian Science, click here.

To read Science and Health with Key to the Scriptures by Mary Baker Eddy, click here

Mary Baker Eddy provides a “brief exposition of the important points, or religious tenets, of Christian Science” (Science and Health, pp. 496-497) in both Science and Health and the Church Manual (pp. 15-16).

THE TENETS OF CHRISTIAN SCIENCE

Science and Health with Key to the Scriptures by Mary Baker Eddy, p. 497

The scientific statement of being

“There is no life, truth, intelligence, nor substance in matter. All is infinite Mind and its infinite manifestation, for God is All-in-all. Spirit is immortal Truth; matter is mortal error; Spirit is the real and eternal; matter is the unreal and temporal. Spirit is God, and man is His image and likeness. Therefore man is not material; he is spiritual.” Mary Baker Eddy, Science and Health with Key to the Scriptures, p. 468:8-15

“Behold, what manner of love the Father hath bestowed upon us, that we should be called the sons of God: therefore the world knoweth us not, because it knew him not. Beloved, now are we the sons of God, and it doth not yet appear what we shall be: but we know that, when he shall appear, we shall be like him; for we shall see him as he is. And every man that hath this hope in him purifieth himself, even as he is pure.”

“Our Master said, ‘After this manner therefore pray ye,’ and then he gave that prayer which covers all human needs…. Here let me give what I understand to be the spiritual sense of the Lord’s Prayer:

Our Father which art in heaven,
Our Father-Mother God, all-harmonious,
Hallowed be Thy name.
Adorable One.
Thy kingdom come.
Thy kingdom is come; Thou art ever-present.
Thy will be done in earth, as it is in heaven.
Enable us to know, — as in heaven, so on earth, —
God is omnipotent, supreme.
Give us this day our daily bread;
Give us grace for to-day; feed the famished affections;
And forgive us our debts, as we forgive our debtors.
And Love is reflected in love;
And lead us not into temptation, but deliver us from evil;
And God leadeth us not into temptation, but delivereth
us from sin, disease, and death.
For Thine is the kingdom, and the power, and the glory, forever.
For God is infinite, all-power, all Life, Truth, Love,
over all, and All.”

The Beatitudes from Christ Jesus’ Sermon on the Mount

“And seeing the multitudes, he went up into a mountain: and when he was set, his disciples came unto him:

And he opened his mouth, and taught them, saying,

Blessed are the poor in spirit: for theirs is the kingdom of heaven.

Blessed are they that mourn: for they shall be comforted.

Blessed are the meek: for they shall inherit the earth.

Blessed are they which do hunger and thirst after righteousness: for they shall be filled.

Blessed are the merciful: for they shall obtain mercy.

Blessed are the pure in heart: for they shall see God.

Blessed are the peacemakers: for they shall be called the children of God.

Blessed are they which are persecuted for righteousness’ sake: for theirs is the kingdom of heaven.

Blessed are ye, when men shall revile you, and persecute you, and shall say all manner of evil against you falsely, for my sake.

Rejoice, and be exceeding glad: for great is your reward in heaven: for so persecuted they the prophets which were before you.”